We now have two opposing realities going on in this country. Both sides are sure their reality is correct and the other one isn’t. It’s turning us all into schizophrenics.

Extremely important information in this article. It is much shorter than my essays so I hope everyone will read or listen to it to the end. Thank you.

Miriam-Webster Dictionary: Schizophrenia often involves an inability to orient oneself with reality, a withdrawal from social interactions, and a failure to integrate thoughts with emotions so that emotional expression is inappropriate.

We now have two opposing realities going on in this country. Both sides are sure their reality is correct and the other one isn’t. It’s turning us all into schizophrenics. Both sides fervently believe they are winning the Covid propaganda battle.

Liberals generally believe in what the mainstream media tells them. That the reason Covid is disappearing is because lockdowns, masks and vaccine mandates worked.

Conservatives generally believe in what has been termed the “alternative media” tells them. That pharmaceutical companies colluded with the “Biden Totalitarian Regime” (BTR) to bilk the American people of billions of dollars to line their own pockets and gain unparalleled power.

Lately, the alternative media is all abuzz with new revelations about the vaccines and Pfizer. There is a euphoric feeling that things are going to change for the better. Surely, with the latest bombshell revelations, Albert Bourla will at last be tried and convicted of “crimes against humanity.”

In a Covid hearing of the European Parliament, Rob Roos MEP for the Netherlands, got a Pfizer representative to admit that:

“At the time of introduction, the vaccine had never been tested on stopping the transmission of the virus.” Roos goes on to explain, “This removes the entire legal basis for the Covid passport. The Covid passport that led to massive institutional discrimination, as people lost access to essential parts of society. I find this to be shocking—even criminal.”

If you watch the video, you will see the Pfizer representative, J. Small, laugh when she responds,

“Did we know about stopping transmission before it entered the market? No, haha. These, emm, you know we had to really move at the SPEED OF SCIENCE to really understand what is taking place in the market.”

THE SPEED OF SCIENCE. Yes, she really said that. Actually, Helen, a reader, reminded me that in her jumbled response she actually said “immunization” instead of transmission. So, I am making that correction.

We have Fauci saying he is the science and that,

“Attacks on me are attacks on science.”

We have the United Nation’s Melissa Fleming saying with all the arrogance of a totalitarian that,

“We own the science, and we think that the world should know it.“

Those of us who have rejected such statements as preposterous lies should be excused for feeling a little schizophrenic. The world that claims to own the science is increasingly becoming the world of falsehoods being accepted as true. They don’t even mind if you know it anymore. In fact, they laugh in your face as they tell their lies.

Surely this must mean we are winning. It’s all so obvious!

Conservatives forget they have been confined to an alternative world and that their voices are not being heard beyond the confines of that world. Nary a peep is being mentioned about any of these revelations in the mainstream media. When it is, it is “fact-checked” into oblivion. In the “real” world, there are billions of people who think we are the crazy ones because that is what the BTR media machine tells them.

While conservatives might read alternative media headlines such as Florida Surgeon General Breaks With CDC, Recommends Against COVID Shots for Healthy Kids, and cheer it as a positive, liberals see this:

Or, the BTR side sees headlines reenforcing the official Covid narrative, like Reuters: Europe likely entering another COVID wave, says WHO and ECDC.

They urged European countries to administer both flu and COVID-19 vaccines ahead of an expected surge in cases of seasonal influenza.

“There was no time to lose,” the WHO and ECDC said.

Other headlines keep the general public in a constant state of stress about Covid, such as Long COVID is a very serious crisis, says head of WHO as he urges world leaders to act now

And we have Pfizer itself boldly coming out with ads targeting children, like this:

When Ultron wreaks havoc, the Avengers act as the first line of defense. People can help protect themselves by staying up to date with COVID-19 vaccinations. Head to Pfizer to get a first look at Pfizer, BioNTech, and Marvel’s comic book!

We have California Governor Newsom signing into law a bill that subjects doctors to discipline and possible suspension of their licenses to practice for spreading mis/disinformation about the COVID-19 pandemic.

“Many health professionals, including physicians, have been the culprits of this misinformation and disinformation effort,” the California Medical Association lamented to lawmakers.

Biden set the stage for this back in July 2021 when he said:

“There Are 12 Individuals on Facebook Who Are ‘Killing People’ with Misinformation.”

This week, the CDC is set to vote on adding Pfizer and Moderna’s Covid mRNA injections to the child and adolescent immunization schedules. A ‘yes’ vote means these companies can no longer be held accountable for vaccine injuries, transferring liability to the BTR’s National Vaccine Injury Compensation Program (VICP). Pfizer and Moderna will at last be able to market their product directly to the public without fear of reprisal—and make even billions more in profit.

Admissions of guilt from the architects of this grand money-making scheme are NOT what’s coming next. Rather, requiring children to have them in order to attend public schools will be the ultimate “proof” that these vaccines are trusted and necessary.

It’s paramount that we stay realistic about the likelihood of Bourla or Fauci or anyone else being brought to justice. We are the ones in danger of being imprisoned, not them! What happens when it becomes law that we vaccinate our children, and we refuse? The alternative media should be warning us about this fact rather than giving us false hopes that our voices are being heard beyond the echo chambers in which we now reside. Thanks to the BTR’s propaganda campaign, we have been forced into this unhealthy, schizophrenic world. The longer this split continues the less likely it is that it can ever be repaired.

And since the BTR has just extended the COVID health emergency, something tells me they don’t ever want this madness to end.

Digitization Is Humanity’s Demise. The “Smartphonization” of Humanity. The QR code is Everywhere 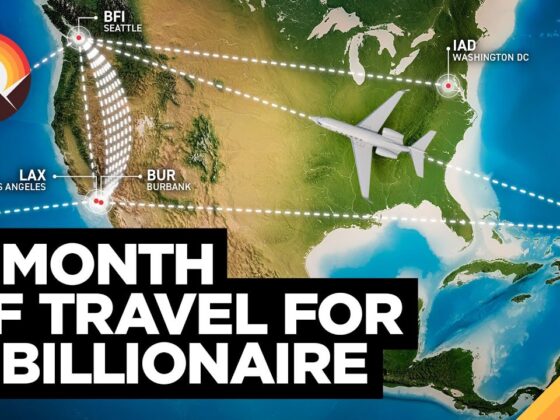 How the World’s Wealthiest People Travel